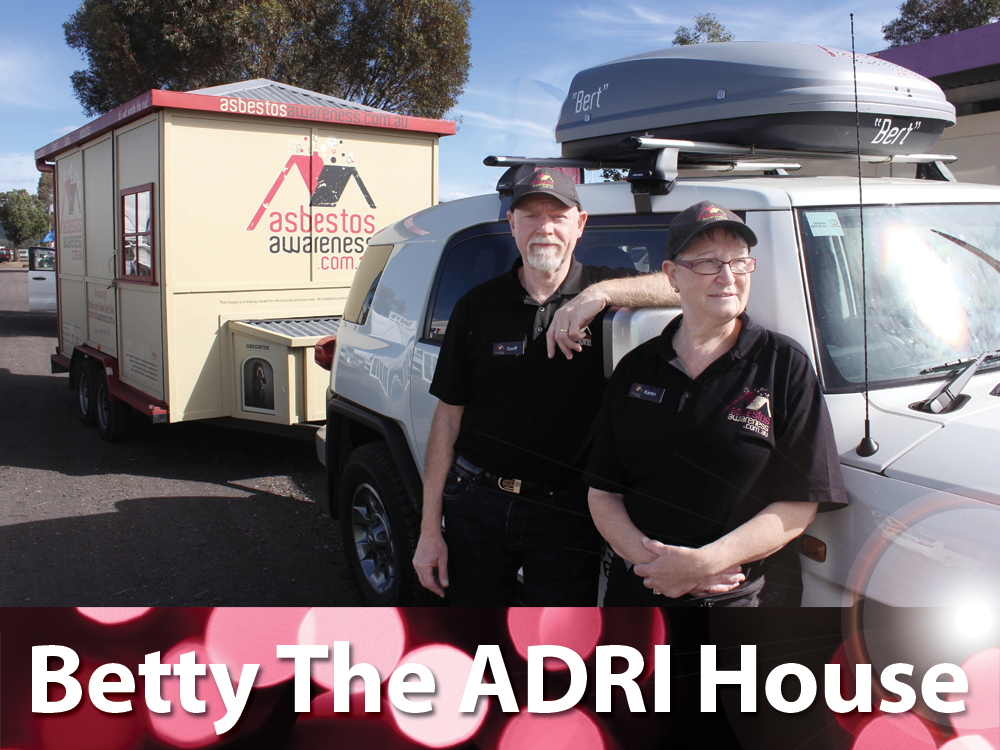 “Betty the ADRI House” was launched in Sydney in November 2012 as part of the National Asbestos Awareness Week campaign.  Betty  is a purpose built prototype model designed to effectively demonstrate all areas in Australian homes (built or renovated before 1987) where asbestos may be found with each and every component personally sourced and selected by the Insight team.

Based in Sydney, Betty is a practical education resource and media tool that educates communities at grassroots level while driving traffic to the website created and managed by Insight – asbestosawareness.com.au

When we first created the concept of Betty, we had no idea how far she would travel to deliver her potentially life-saving message to communities across Australia.  Since launching on 22 November 2012, Betty and her dedicated crew have toured extensively throughout NSW, VIC, QLD, SA and the NT covering more than 50,000 kilometres and has been the focus of extensive media coverage taking her important message into the homes of every community Betty visits.

In 2012, Insight researched and developed ‘Betty The ADRI House’ to compliment our National Asbestos Awareness Campaign.

Betty is a world-first experiential marketing tool and model exhibit designed for transportation to demonstrate asbestos locations in and around homes in multiple communities. 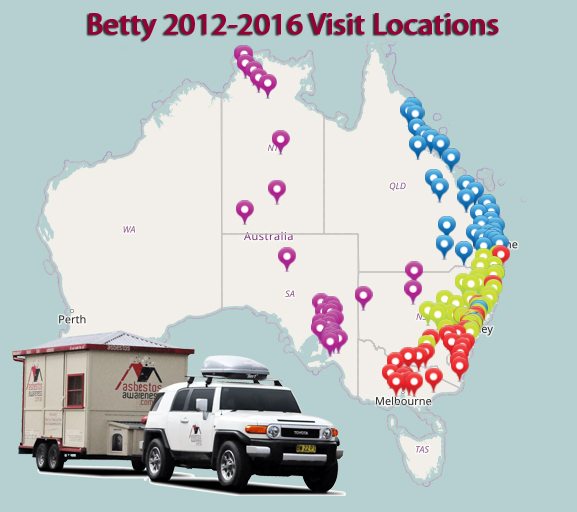 Over three-and-a-half years, Betty’s extensive tours-of-duty, took her as far north as Cairns, as far south as Warragul and as far west as Condobolin while enduring 40+ degree heat, sub-zero temperatures and dramatic storms throughout populated areas of NSW, QLD and VIC reaching more than 2.19million Australians at grass-roots level with her potentially lifesaving message.

Betty’s Ongoing Success – Taking Her Message Beyond The Eastern States

Following on from her success in Australia’s eastern states, in 2016 Betty’s adventures took her on her most extensive tour to date with Betty and her Crew travelling more than 6,500 kilometres and appearing at 36 events over a 46 day period throughout the Northern Territory, South Australia and Far West NSW.

Since Launching in 2012 Betty has:

In 2017, Betty and her dedicated crew are set to take Betty’s life-saving message off the mainland on her first tour of Australia’s beautiful Apple Isle, Tasmania.

Asbestos Awareness – What Stakeholders have to say about ‘Betty’ 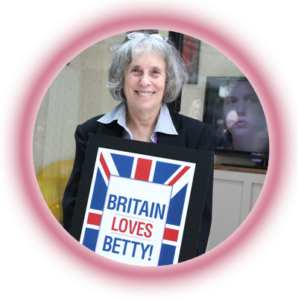 Betty, the asbestos model house, is a shining example of a creative approach to a difficult subject. No one really wants to KNOW that their home might be a death trap but the fact of the matter is that asbestos remains hidden in homes as well as public buildings.

Betty is a focal point for a campaign which reaches out to the public in a positive way to educate and arm them with the information they need to take steps to protect the lives of those they love. I wish that Betty had a British cousin!
Laurie Kazan Allen, Co-ordinator of the International Ban Asbestos Secretariat (IBAS), London, UK 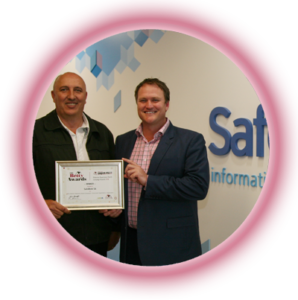 SafeWork SA was a proud supporter of the ‘Betty the ADRI House’ tour in South Australia. The Betty tour formed part of a wider SafeWork SA educational campaign on asbestos awareness from October to December 2016. Thanks to the support of Bunnings Warehouse, SafeWork SA and Betty we were able to engage with multiple communities, in particular home renovators, across metropolitan Adelaide.

Having a purpose-built van to demonstrate where asbestos can be found in the home is a highly effective way of explaining the risks associated with disturbing building materials that may contain asbestos. At the end of our campaign, the South Australian Government’s asbestos information website received an increase of almost 20 per cent in page views compared to the previous year.

We believe the Betty tour played an important role in this increase and in increasing the public’s awareness and understanding about asbestos.
Brett Pfeffer, Principal Industry Advisor, Workplace Advisory Services, SafeWork SA 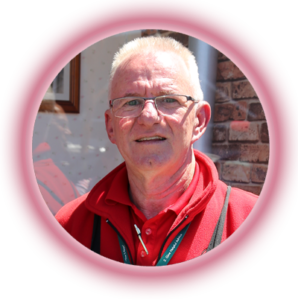 Our Bunnings Team members and customers in the NT and SA stores where Betty visited (as part of National Asbestos Awareness Month) was all positive with many saying they’d learned more about the dangers and correct safe handling of asbestos. In summary; Betty and the information provided worked well. One can honestly say that a picture say’s a thousand words and Betty and the presenters supported this. For our other stores that didn’t host Betty, they’d heard about the Betty (Van) and wished they hosted it in their stores. I think if we can get Betty to Tassie that we will have the same positive outcome.”
Morris Lamacchia, Marketing Services Manager SA/NT/TAS, Bunnings Group Limited 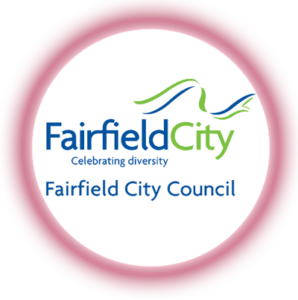 Fairfield City Council was lucky enough to have a visit from Betty and her crew today to educate our residents about the dangers of asbestos when renovating their homes. Around 300 residents came along to talk with the experts and gained valuable knowledge that may very well save their lives and the lives of their loved ones.
Stephanie Keane, Waste and Sustainability Projects Officer, Waste Strategy and Sustainability City Operations, Fairfield City Council We have a very unique opportunity with Betty to highlight to Territorians the dangers of asbestos. Asbestos can be found in a number of buildings across the Territory and it is important that we remind Territorians if they are undertaking renovations, they need to look out for asbestos to protect themselves and their families.”
The Hon. Natasha Fyles, Attorney-General and Minister for Justice (NT) 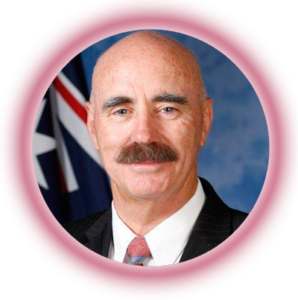 It’s great that Betty has come to Alice Springs and I’m grateful to those who’ve funded this trip and the roles of those involved in it because increasing awareness of people who may be ignorant of the dangers of asbestos is very important.

It’s important that people who have asbestos in their houses understand how to deal with it and if they need to get rid of it get the professionals in. It’s very, very important that it’s done safely so that people aren’t affected adversely by it.

Betty’s lovely and I wonder what people think when they’re driving up the highway behind this house. I can see how Betty would stimulate people to click onto the website and they too can be informed just by seeing Betty passing by.
The Hon. Warren Snowdon MP, Federal Member for Lingiari (NT) 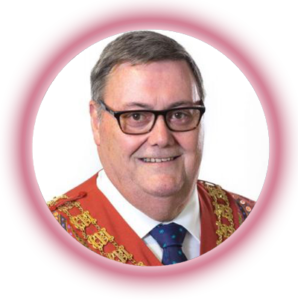 Asbestos awareness needs to be carried right across the community. The provision in what you’ve done in travelling down the highway towards Alice Springs from Darwin is all about awareness.

Betty is a very practical resource. We know how popular home renovation shows are so as long as people keep talking the message and doing what you have done in bringing Betty to Alice Springs, it all helps towards creating that awareness.
Damien Ryan, Mayor Alice Springs Town Council 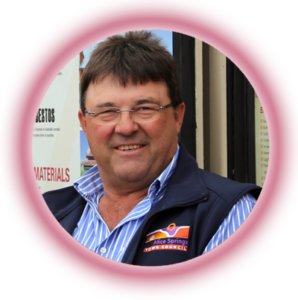 I’m grateful that you have come here (Alice Springs NT). The information in the media has been very good along with seeing Betty which has opened my eyes up to the dangers of asbestos again.
Jamie de Brenni, Deputy Mayor, Alice Springs 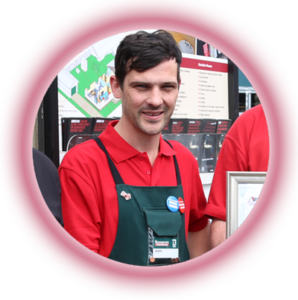 Betty is a really unique way of telling a story. It’s a very great set up with the visual display and it sparks people’s interest to come and have a look at it.
Sean Wood Manager, Bunnings Warehouse, Alice Springs NT A purpose built, mobile caravan house that graphically illustrates the pervasive use of asbestos products in the home is a great way of raising public awareness. And as someone who had not previously come across ‘her’ I was really impressed, as I’m sure most people are when they meet ‘Betty’ for the very first time. That was certainly the feedback that I and my Asbestos Diseases Society SA colleagues had from the people we met during the Adelaide stage of her tour.

Betty’ is a powerful, educational awareness tool that assists us in understanding the dangers associated with asbestos in the home. This is because of her practicality. People can see for themselves what asbestos products look like, what they’re used for and where in the home they are likely to be found.

Don Burke’s involvement in the media side of the Betty project was also a smart move as he is an informed, popular and trustworthy asbestos ambassador.
Dr Kevin Purse, Asbestos Diseases Society of South Australia